Do you like fantasy-Rome settings? What about hottie warrior heroes with major mommy issues? Gods, Goddesses, Faeries, and other mythical creatures? Strong-willed heroines with a knack for starting wars? Well…then you should read Sabaa Tahir’s Ember series. The first three books are out now and I binged them within a week. They slowly ripped my heart to pieces and I loved every minute of it.

So, leading into the actual topic of today’s blog – Elias Veturius! He’s been added to my book boyfriends list because he manages to be a f*ckboi while attempting to save the world from total annihilation and it Just. Works.

Per my previous mention, Elias is a stone-cold killer with some deep internal struggles about what it means to be good vs. evil, do right vs. wrong. He’s the ultimate EMO kid and I couldn’t resist putting together a playlist that spoke to my dark emo soul. High School Devon was rejoicing with all these song picks and fell in love with her emo soulmate even more.

Sabaa posted this to her Insta stories a bit back, stating that it was an Elias song, and it inspired this entire playlist. She validated that he is indeed an emo f*ckboi and I couldn’t resist including it because it’s now canon – and also is Elias’s theme song.

Notable Lyrics: “I’m not quite myself these days
Guess we all come undone
Time to time, in different ways
Well, I have myself to blame
Guess I don’t understand
I need help in many ways”

Coheed and Cambria has an anthem for every emo kid, and Blood Red Summer is def an Elias pick. He kills people, is good and it, doesn’t know why and wonders if he’s destined to walk amongst the shadows forever.

The End, My Chemical Romance

I’m just gonna leave this here because SABBA WHY WOULD YOU END BOOK 3 LIKE THAT.  😭

Notable Lyrics: “If you look in the mirror and don’t like what you see
You can find out firsthand what it’s like to be me
So gather ’round piggies and kiss this goodbye
I’d encourage your smiles I’ll expect you won’t cry”

What did you think of my picks? What songs would you add? Do you have any playlists you’d want me to create?

Check out Read By Dev’s book review of Torch Against The Night, Sabaa Tahir’s best-selling sequel to An Ember In The Ashes.

A Torch Against The Night

The book is narrated by Elias, Laia and now Helene. They are dealing with the aftermath of the Trials – where Elias gave up being Emperor, Laia saved Elias’s life, and Helene swore fealty to evil Emperor Marcus. Elias’s mom, the Commandant, is still evil and crazy AF. Laia’s brother is still in prison (who knows if he’s dead or alive), and the world is still going to hell. There are dead spirits roaming around, an evil god-like creature roaming around trying to get revenge, and of course the scheming for power. So, naturally, everyone splits up to do their own thing.

If I’m being honest, Helene’s chapters were boring AF but for some reason I can’t resist her character arc – she’s amazing in her own way. 75% of this book also felt like I was watching season six of Game of Thrones. Everyone gets separated, they are all traveling/trying to make it the epic battle, and I had to wait most of the book for the crazy sh*t to go down. BUT, the wait was worth it. If you’re looking for a milder version of Game of Thrones, please read this series!

There’s enough faerie, magic, and mythology to go around in this series. Tahir takes well-known folklore and spins a unique, refreshing world that I didn’t know I needed.

I love when there is evil lurking in every corner of a story. Every main character is dealing with their own personal hell brought on by a different bad guy. Evil king? You got it. Evil mother? Yup, it’s there. Evil mystical/god-like creature. For sure! If there’s a way to keep me interested, it’s when I can’t figure out who the biggest threat is.

That last page will have you like…that’s all I’m saying. The ending is the best part of book 2. You’ll want to start book 3 immediately!

Helene, You Bore Me

I could have done without Helene as a narrator. Her loyalty is so engrained into her – mind, body and soul – and I CAN. NOT. HANDLE. IT. At one point I thought about skimming through her chapters just to get back to Elias. She’s not a bad character, she’s just…different. I love her, but I also hate her. She’s the frenemy you hope gets better (spoiler: she does…finally).

The Number One Rule IS DO NOT SPLIT UP

Why does everyone insist on splitting up to save the world? Everyone knows you STICK TOGETHER. Once Elias, Laia, and Helene are on their own, the story gets a lot slower. I wish there were more instances where the MCs were a group and there was more action, but I totally understand why it was necessary…I just wish it wasn’t.

I loved A Torch Against The Night, but it wasn’t as good as An Ember In The Ashes. With that being said, it still holds its own and the set up is necessary for that crazy ending. It’s a solid sequel, and I wanted to start book 3 as soon as I could!

Have you read this book? If so, what did you think of it?

Check out my mini reviews of all my March 2019 reads!

How is it spring already? How are we already a quarter way through 2019? How have I managed to read 6 books this month and not review any of them yet? Well, I’ll tell you why, because I’ve been neglecting my blog for the greatness that is Elias Veturius (more on that below). I promise to have full reviews for these soon, but since it’s the end of March – here’s some TL; DR action!

This is a creepy, dark, feminist Rage Fest for the masses. The main ladies are diverse, unique and so refreshingly weird. Read for a new take on female friendships. Down with the patriarchy! You will rage so hard against the antagonist(s) and love the ending. I love monster stories, so it gets bonus points just for that.

This is book two in the Ash Princess trilogy and I was not disappointed. It wasn’t as amazing as Ash Princess – I really wish there was more magic – but it definitely lives up to the hype. If you were ever into Avatar the Last Airbender, you’ll enjoy book one. And if you’re into strong, independent queens who don’t need a man by their side to kick ass and take names, you’ll fall in love with Theo in book 2.

For all my Cruel Prince fans, please don’t hate me, but this series DOES NOT live up to the hype…like at all. The Wicked King wasn’t everything I expected it to be, but it was way better than The Cruel Prince, so I’m giving it a one-up in my star rating. I’m also going to be petty with my rating and say that Jude gets what she deserves and so much more, and I enjoyed seeing her fumble. I still hate Taryn. Locke is the absolute worst. And Cardan is an evil little d-bag (but he can stay because for some odd reason I’m kind of into it). Even though I didn’t enjoy this as much as the masses, the ending was honestly so great.

A Court of Thorns & Roses (Reread)

It’s been a full year since I’ve read ACOTAR so I decided to reread the series in between some of the newer titles I’m getting to. The first time around, I rated this one 3 stars because I couldn’t get behind Tamlin, and Feyre was a whiny brat. Knowing all the twists and turns now (and obviously that SJM is an evil-genius who deserves an award for playing with my emotions) I’m still giving this 3 stars. The set up is worth the outcome in books 2 and 3, so PLEASE READ, but don’t expect book 1 to take your breath away.

An Ember In The Ashes 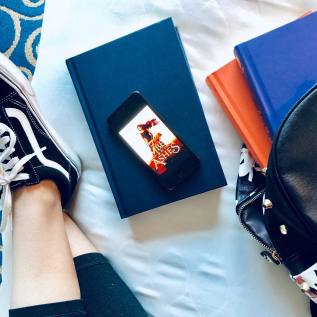 WHY DIDN’T I READ THIS SOONER?! An amazing fantasy world with complex characters and an intense plot. Elias Veturius is the most irresistible f*ckboi ever and I love him to death. Laia is a bit on the annoying side, but she grows on you. I felt like I was reading a Game of Thrones X Throne of Glass Saga and I was not disappointed with the oracular fortune telling, political scheming, and magic. I started book two immediately. Which leads me to…

A Torch Against The Night

Per yoozsh, book two isn’t as amazing as book one, but it’s great in its own right. The book is narrated by Elias, Laia and now Helene. If I’m being honest, Helene’s chapters were boring AF but for some reason I can’t resist her character arc. 75% of this book also felt like I was watching season 6 of Game of Thrones. Everyone gets separated, they are all traveling/trying to make it the epic battle, and I had to wait most of the book for the crazy sh*t to go down. BUT, the wait was worth it. That ending…wow. Excuse me while I binge Reaper At The Gates.

What did you think of my reads this month? Will you be adding any to your TBR? Have you read any of these already?